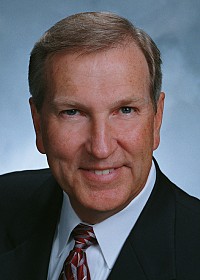 James Edward “Ted” Robertson served until recently as Chief Technical Officer, the Americas, for Magna International and Vice Chairman, of Magna E-Car Systems, a joint venture between Magna  and the Stronach Trust focused on the global electrification of the car.

Robertson was also a member of the E-Car Systems executive board. He joined Magna International Inc. in May 2006 as the Executive Vice President, New Product Creation.

While at GM, Robertson was responsible for engineering five Indy 500 pace cars, two Daytona 500 pace cars, and numerous other vehicle programs including the Chevrolet Trailblazer that won Truck of the Year and the GMC Envoy that won SUV of the Year Awards.

In 2002, Ted Robertson retired from GM and was conferred the title Chief Engineer, Emeritus, for General Motors by Jack Smith, Chairman of GM. He then joined ASC as Vice Chairman for Product Development.

Professionally, Mr. Robertson has been actively involved in the Society of Automotive Engineers (SAE) for over 40 years, and held numerous SAE Section Governing Board positions and two terms on the SAE Board of Directors.  He was Chairman of SAE’s Finance Committee and Compensation Committee, and Chairman of the Detroit Section.

Mr. Robertson was born and raised in the Oshawa area and is an active alumnus of the University of Toronto, where he earned  Bachelor’s and Master’s degrees in Mechanical Engineering.  In 2012, Ted Robertson was elected to the University of Toronto’s Engineering Hall of Distinction. He has published papers with the ASME and SAE and holds six patents. In 2014, Mr. Robertson was elected as a Fellow to the Canadian Academy of Engineering. Ted Robertson is a registered Professional Engineer in Ontario, a licensed pilot, and a recipient of the Queen’s Scout Award.