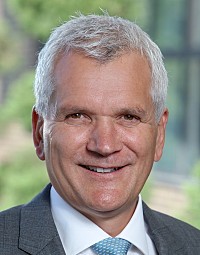 Paul Mascarenas is a member of the Board of Directors of ON Semiconductor (NASDAQ: ON), US Steel (NYSE: X), Spartan Motors (NASDAQ: SPAR) and Borg Warner (NYSE: BWA); and a Venture Partner with Fontinalis Partners, a Detroit based strategic investment firm focusing on early stage companies in the rapidly emerging area of next-generation mobility solutions.

Previously, Paul was Chief Technical Officer and Vice President, Ford Motor Company. In that role, he led Ford’s worldwide research organization, overseeing the development and implementation of the company’s technology strategy and plans. Paul also led the establishment of Ford’s Research and Innovation Center in Palo Alto, CA, which supports the company’s vision to provide uncompromised personal mobility for people around the world.

During his 35+ years in and around the automotive industry, Paul has amassed extensive experience in Product Development, Program Management and Business Leadership, with assignments in the United Kingdom, Germany and the United States. Paul has also served in several business, technology and academic advisory roles. These include the British American Business Council, Magna International Technology Advisory Council, China SAE International Technology Advisory Committee and the Oak Ridge National Laboratory Scientific Advisory Council. In addition, Paul is an investor and advisor to a number of start-up companies.

A long time Chartered Engineer and fellow of the UK Institution of Mechanical Engineers, Paul is also a fellow of the Society of Automotive Engineers and currently serving as the 2019 SAE President. He was general chairperson for the 2010 SAE World Congress and Convergence events. Paul joined the board of FISITA (The International Federation of Automotive Engineering Societies) in 2012, and served as its President from 2014-2016. He is also a member of the Institute of Directors. Paul holds a degree in Mechanical Engineering from King’s College, University of London in England and in June 2013, received an honorary doctorate degree from Chongqing University in China. In December 2014 he was appointed an OBE by Her Majesty Queen Elizabeth II, in recognition of his services to the automotive industry