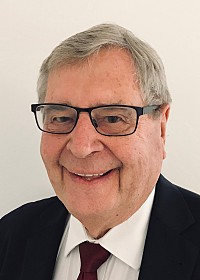 James McKnight was born in Ayr, Scotland and in 1954 he was accepted as a Student Apprenticeship at the local Guest , Keen and Nettlefold Company.

In 1963 he joined Ford Motor Company. As Manager of Advanced Truck Engineering he was responsible for the successful board submission to introduce the Ford Cargo truck. In 1977 he joined Leyland Truck; his major contribution was to lead the development and introduction of the Roadrunner Truck. Mr. McKnight joined the Leyland Bus Board in 1985. Following a management buy out, Volvo Bus acquired the Company and Mr. McKnight was retained as Product Development Director .

At Volvo Bus he led the design, development and introduction in 1995 of a range of single deck low floor city buses marketed worldwide by Volvo. Following this, McKnight led a management buy out of the Volvo design resources in the UK , creating Leyland Product Developments Ltd (LPD), with McKnight as Chairman and Managing Director.

Following the 1992 London Congress, McKnight was invited to join the FISITA Board, rising to President for the term 1998-2000. He was responsible for the introduction of the Students and Young Engineers events and the Travelling Fellowship initiative. Also, McKnight contributed to the establishment of the Honorary Committee, now known as Corporate Members, which created a continuing revenue stream for FISITA. In 1998, FISITA (UK) Ltd was incorporated under McKnight’s chairmanship ; by this the FISITA secretariat gained the necessary autonomy to prepare for the challenges of the new millennium.