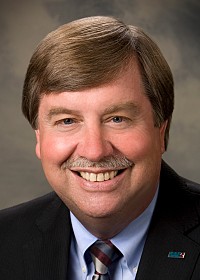 Dan Hancock retired from General Motors (GM) effective September 1, 2011, and now consults with the automotive industry in the powertrain and alliances areas. His last position with GM was Vice President, Global Strategic Product Alliances. During that time he served as Chairman of GM’s DMAX and VM Motori diesel engine joint ventures with Isuzu and Fiat, respectively.

Hancock has been a member of SAE International for 40 years and is an SAE Fellow. He has recently been elected President of SAE International for 2014. He has been Chairman of the SAE Detroit Section and has served on the SAE Board of Directors. In addition, he served as Chairman of the SAE Foundation Board of Trustees from 1998 to 2008. During his tenure the SAE Foundation conducted a successful capital campaign, raising $26.5M for SAE’s A World in Motion® program.

Hancock served as president of FISITA, the International Federation of Automotive Engineering Societies, from 2004 to 2006 and continues to participate with FISITA in his emeritus status. He was inducted into the National Academy of Engineering in 2011. He is a recipient of the SAE Sid Olsen Engineering Manager Award, the SAE Medal of Honor, the SAE Gordon Millar Award, the Great Golden Medal for Service to the Republic of Austria, and the Sagamore of the Wabash recognition from the State of Indiana.

He now serves in board and advisory positions with several organizations, focusing on new powertrain technologies and STEM education.

Hancock splits his time between his homes in Indianapolis, Indiana, Farmington Hills, Michigan, and Beaver Creek, Colorado, where he enjoys skiing and high altitude hiking.